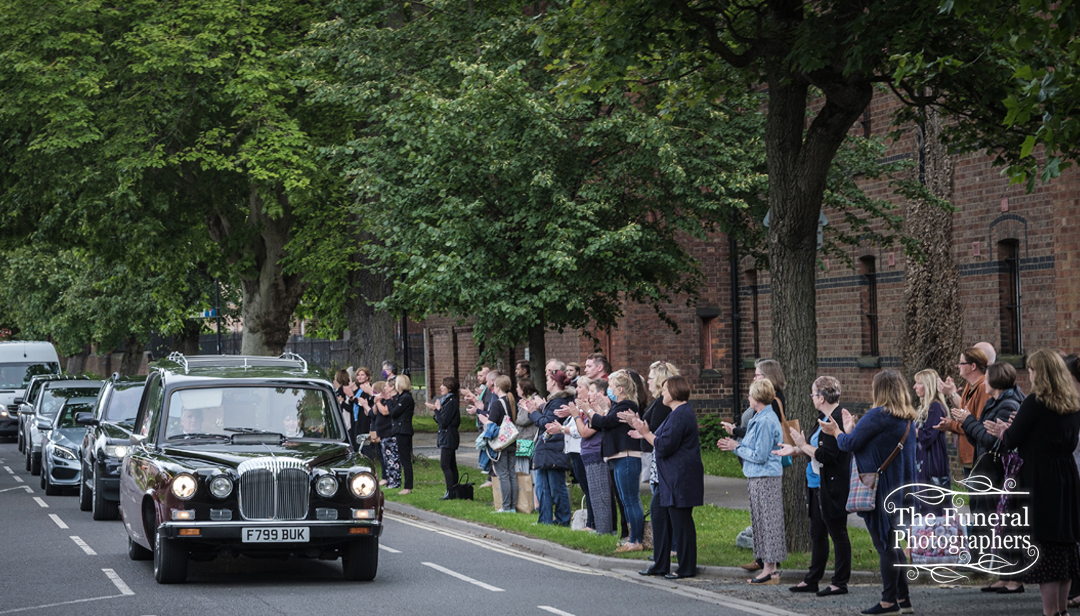 As funerals, wakes and memorial services continue to be restricted the videoing and live streaming of the funeral service itself has increased in demand exponentially, enabling friends and family to share in the service albeit remotely.  Indeed most recently we have seen the nation join the family of Captain Sir Tom Moore as they said goodbye.  We have adopted different ways of saying goodbye but for those families experiencing the restricted funerals with very few family and friends in attendance, it has been and continues to be a hard pill to swallow.

Is There A Place For Funeral Photography Today? 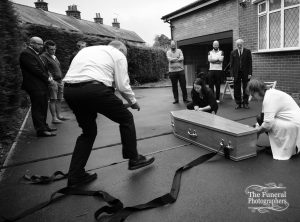 Is there room, perhaps, for Funeral Photography?  We caught up with Funeral Photographer Andy Hopkinson and asked him the question. “It’s actually more important now than at any time in the past and the families I work with are really grateful to the Funeral Directors who suggest the services of a photographer to them.” Andy shares with us.

Andy continues, “Having lost a loved one and consumed with grief, people are usually unaware of those friends and family who did pay their last respects by lining the route or being outside their house to see them off on their last journey. This is where a funeral photographer can make such a difference. Working at a distance, often unseen and unobtrusive, they quietly go about the business of documenting events as they unfold. Friends respectfully bowing their heads can be viewed in the album later and bring comfort to the family to know that they “turned out” to say goodbye, even if they were not permitted to attend the service.”

The Theatrics And More 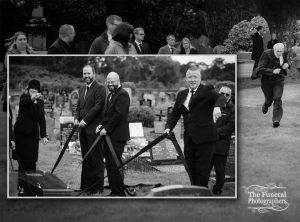 the coffin before proceeding to walk the last few steps of the journey in front of the hearse as they go about their work, their staff also respectfully bowing their heads to the coffin before “bearing” it into the Chapel or Crematorium.  Most family members will be unaware of these little actions of such tremendous respect until they see the photographs afterwards.” states Andy.

“But it’s not only the theatrics of the day that are that are captured…”Andy tells us “At a recent funeral I privileged to document, friends had taken on the task of being bearers.  Their Funeral Director, Full Circle Funerals had arranged a rehearsal long before the service however I was there to capture what turned into a lighter moment during the day. It looks so simple, carrying a coffin and later lowering it gently into the grave, doesn’t it? But the reality is it takes coordination and teamwork. When one of the bearers was a little distance away from the grave at the time the coffin needed lowering I was able to document his sprint across the churchyard to the grave – and the smiles that brought to what was otherwise a sombre moment.” 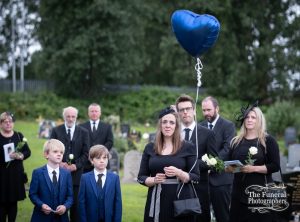 “Having the right lenses and equipment means that I can capture key events from a distance without encroaching on very personal moments. It also means I can record the whole scene as it unfolds in front of me.  Take the release of a single balloon, for instance, the correct lenses ensured I captured the people and the balloon in the same frame whilst being easily able to keep a respectful distance so as not to intrude on such a meaningful moment.  The photo of the balloon making it’s way up and away in the blue sky was an appropriate and very emotive end to the album.”

What Skills Does It Take To Be A Funeral Photographer?

“Being a Funeral Photographer carries with it a huge responsibility. It is a skill that cannot be taught. It is knowing when to document, quietly unseen the moments unfolding throughout the day and the understanding of when it is inappropriate to take a photograph, no matter how emotive you may think it is. Lastly, it is the sensitivity required to know when and how to ask for permission to document some of the most private moments.”

What Made You Decide to Offer Funeral Photography?

“My first experience of funeral photography was when a friend asked me to document for them the colleagues of their loved one outside their workplace, an army barracks, as the hearse passed by as they wanted to remember who had turned out for them.  When I presented the photos to the family I realised how incredibly important and precious were the memories of that day that I had recorded. Having spent years photographing weddings and portraits, funeral photography is one of the most rewarding genres of photography I have ever undertaken. It is a privilege to be entrusted with respectfully and quietly documenting such personal moments with sensitivity and respect. Every funeral tells a story, it is those stories I seek to keep alive with my photography.”

Is Funeral Photography a New Thing?

“Believe it or not, funeral photography is about as old as photography itself. Early photographers were around in the days when death was a common occurrence and it was families that cared for the deceased until the funeral and subsequent burial. “Death Photography” was an early line of business for the local photographer. Back in those days, cameras and film technology required subjects to stay perfectly still for several seconds. Keeping still for a photograph, and families accustomed to being around, handling and caring for them meant posing the dead with living relatives was a natural progression. It quickly became a fashionable and affordable memento of a loved one, even going to the extent of painting on the negatives and adding open eyes to the deceased afterwards. This led quickly to photographing funeral processions, images of families next to open coffins and individual portraits of the dead in much the same way making “Death Masks” was popular a few years earlier. Funeral photography nowadays is common in the US, Australia and Caribean countries. Here there has been a photographer in attendance at most military and service funerals for over a hundred years. It might seem uncommon or unusual to some, but to others, it’s always been.”

If you wish to learn more visit the funeral photographers website here.

Andy Hopkinson can be reached by emailing andy@fnsphotography.com and on 07929625984.

© All text Sharon Malone 2021. All images Andy Hopkinson, FNS Photography and reproduced with kind permission from the families concerned.