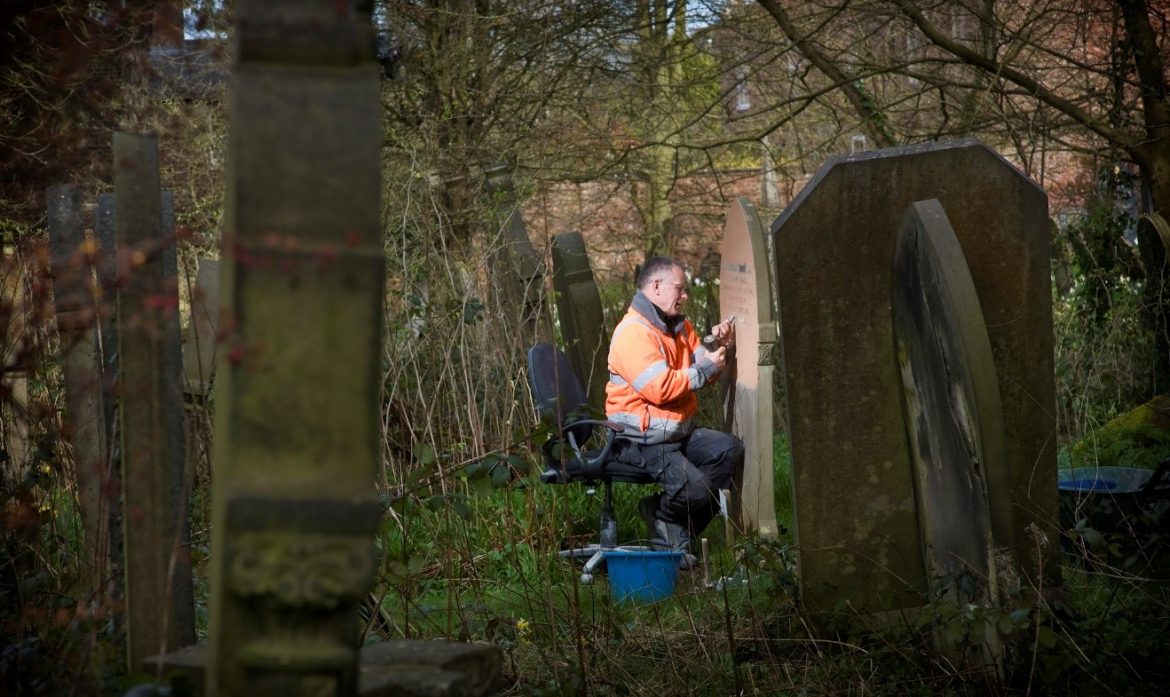 A Chisel, A Hammer And A Robin

A Tip-tapping Heard in the Cemetery!

On a bright and sunny Spring morning amidst the daffodils, sweet-scented hyacinths and ancient gravestones in York Cemetery there sits a solitary figure, patiently tip-tapping at the delicate stone in front of him.  We hear him before we see him, his hammer and chisel strangely in tune with the birds singing all around him.
He blends in beautifully to his surroundings, as if he belongs in the wooded glade which is his workplace today.  He appears to be oblivious to the little Robin who carefully supervises his every move. It turns out later the Robin
is often his companion wherever he is working.  This is Paul Sandilands; he is one of only a handful of skilled
Stonemasons left in the country today.

It was Paul’s form tutor, who, recognising his artistic talent set him on the road to what was to be not only his passion but his life-work too. She handed him a sheet of paper, saying “They are looking for someone….it may be of interest to you.”  The paper was an advert for a local, family-run business, J Rotherham, Monumental Stonemasons.  They were looking for Saturday staff.  At only 15 years old Paul became one of the youngest members of staff to join the Rotherham fold, albeit only on a Saturday whilst he completed his studies at school.

Joe Rotherham Senior, a craftsman Stonemason liked what he saw in the young lad who worked hard cleaning and re-fixing the kerbs and headstones that formed the bread and butter of the Company’s business.  The workshop would prepare the stones at the beginning of the week and Paul would accompany and assist the fitters at the end of the week, working in the cemeteries and graveyards around the Pocklington area.

Joe recognised Paul’s hard work and offered Paul the opportunity to stay behind each Saturday after his morning shift for a free lesson in stone carving and lettering.  It was an opportunity Paul was keen to accept and over the weeks he watched in awe as Joe’s skilful hands and tools made something extraordinarily beautiful from the stone in front of him.  Each week became a Masterclass and Paul very quickly learned the skills and techniques he still practises today.  When he left school in July 1984 Paul was delighted to accept the full-time position offered at the family firm.
There followed many years of learning his craft, he attended night school studying sculpture and calligraphy and went on two courses to learn at the hands of expert Mason John Green from Oxton. The majority of his education, however, came “on the job” as he watched and assisted other craftsmen Masons such as Joe Rotherham and
Fred Emerson – who sold his York-based business to the Rotherham family when he retired – although he continued to accept lettering and carving commissions for a number of years thereafter.  There was a tone of admiration and respect in his voice when  Paul quietly spoke about Fred Emerson, commenting on what a different style
Fred had to Joe Rotherham and how fast he was at letter carving.  Fred had a quite unique style, often working
in lower case lettering as well as the more traditional upper case favoured by other Stonemasons.

A Robin Comes To Play

Paul was honoured with the task of creating Fred’s gravestone when he died, we could see it from where Paul was working today.  A large black monolith, on which is inscribed a hammer, chisel and a Robin. 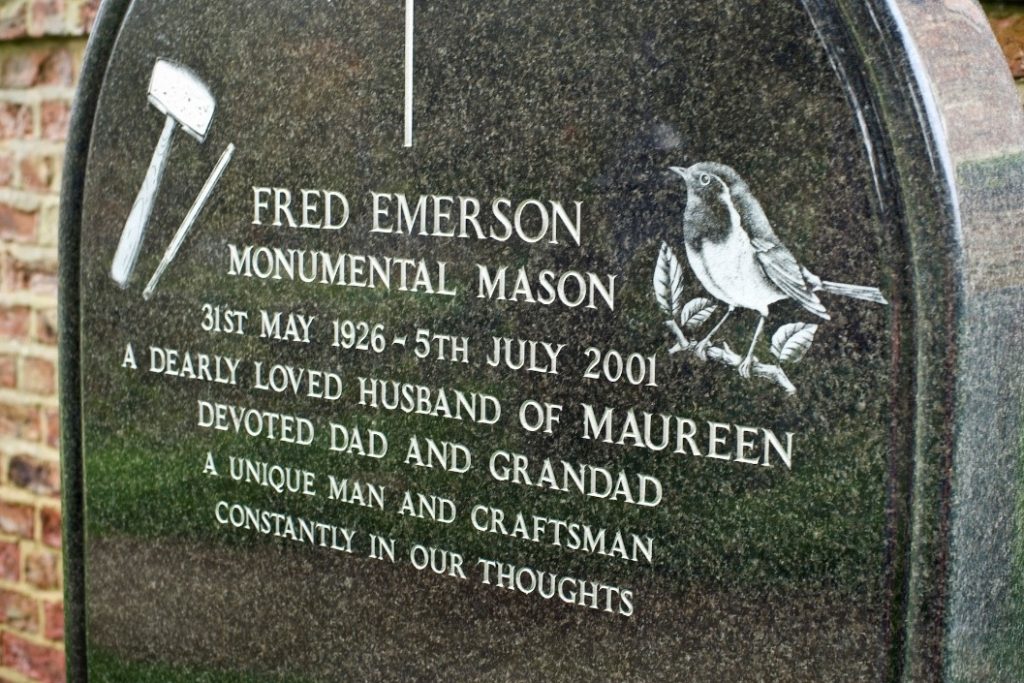 The Robin is significant as Fred always said that there was a Robin who sat watching him work in his York workshop – just as there was today, watching Paul.

The headstone Paul was working on today was deemed too delicate to risk moving and so he had been commissioned to undertake the delicate carving with the stone still “in-situ”.  As we approached, I could see that Paul had already marked out in pencil on top of a clay wash the inscription he was about to carve.  It was fascinating to watch him work and for a few fleeting minutes, I could imagine how Paul must have felt watching Joe Rotherham all those years ago.  The pencil lines crisscrossed the top of the headstone, creating a crossword type of layout and each individual letter had been carefully drawn in the individual squares. 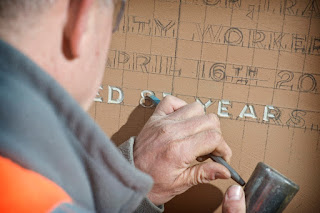 When asked which commissions he has worked on that he had found most rewarding Paul doesn’t hesitate, the first he mentions was hand-carving a beautiful stone fireplace for the home of a multi-millionaire businessman.  Fireplaces, Paul explained were Matt Rotherham’s passion. Paul had worked on many different stone fireplaces but this one was very ornate with extremely intricate carving and Paul had a great sense of satisfaction when it was done and fitted.
His second thoughts were of some huge stone capitals (the fancy bits that sit on top of stone columns) which
J Rotherham were commissioned to carve for a large stately home. It took 2.5 years to carve them all but, Paul lamented that he had never seen them all in place – something he would like to do.

A Moving Memorial – Honouring The Australians

One of the  – most moving tasks Paul has undertaken however was the creation of a memorial dedicated to two Australian Airmen who crashed their De Havilland Mosquito plane into the Parish Hall at Horndean in Hampshire, just 3 miles away from their Thorney Island base in 1945. On seeing the aftermath of the crash the 1940’s Horndean children were so touched by the sacrifices made by the two airmen that they campaigned and raised funds for years in order to commission a fitting memorial. The memorial was carved by Paul and unveiled on the 75th anniversary of
the crash. Paul met some of the surviving children at the unveiling of the monument.

When asked how Paul likes to spend his spare time, unsurprisingly his answer involves his artistic nature and he candidly shows me photos on his phone of some beautifully painted pet portraits, with pictures of the dogs and then pictures of their painted portraits.  The likeness is breath-taking. Paul also shares that he still likes to sculpt in clay.  In addition to this, he loves walking, playing squash, cycling – both on the roads and mountain biking – and playing golf. 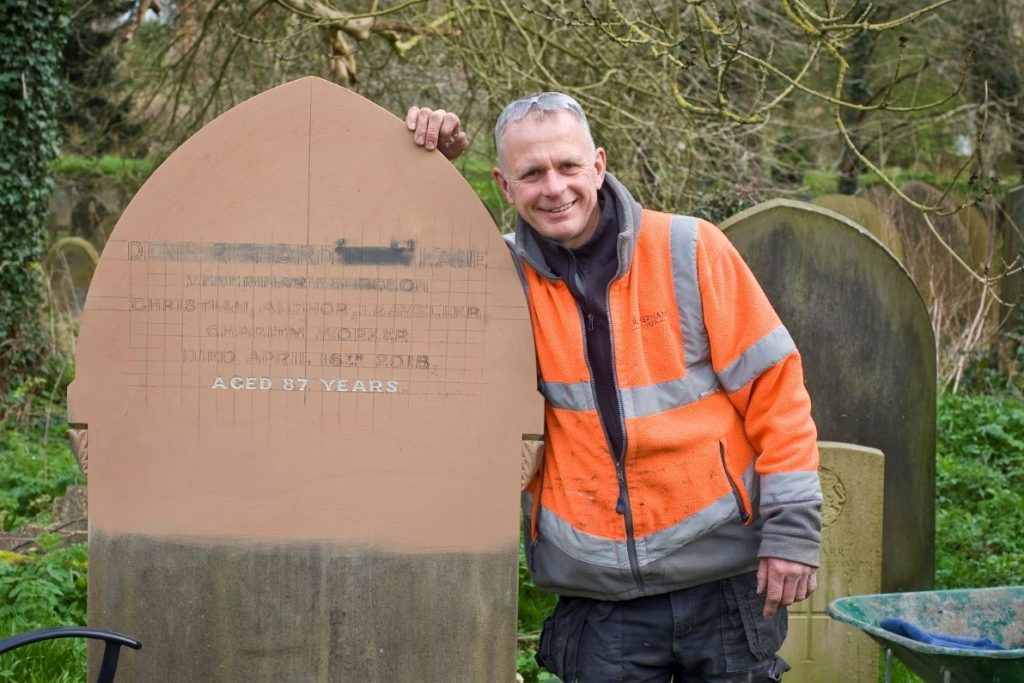 As we leave him to his work, we take a moment to visit Fred Emerson’s memorial and once again I am aware of the tip-tapping sound of Paul’s hammer and chisel and I find myself momentarily musing if Fred is watching over Paul as he practises the art he learnt in part at the skilled hands of Fred.  At that moment the little Robin flies down and sits on a gravestone, right by where Paul is working and carefully watches him.  A coincidence?  I think not.
© All text and images Sharon Malone 2020
Share on Facebook Share
Share on TwitterTweet
Share on Pinterest Share
Share on LinkedIn Share
Share on Digg Share

3 thoughts on “A Chisel, A Hammer And A Robin”