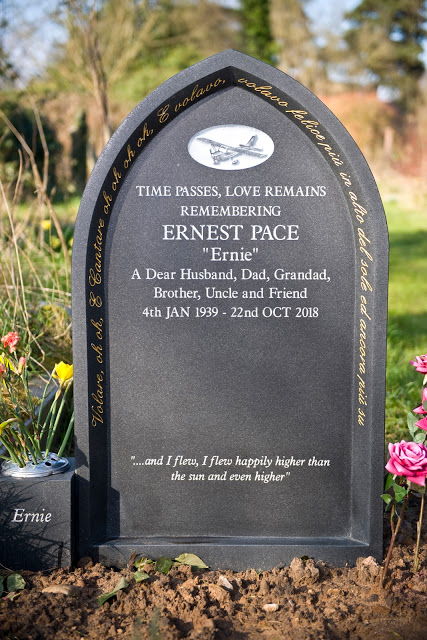 Happiness was at the top of the agenda whenever Ernest “Ernie” Pace was around.  He was known for two things: making those around him laugh and singing.  Not just any old song but one song in particular: Dean Martin’s version of “Volare”. Originally written all in Italian it was subsequently performed by the Gypsy Kings in their native Spanish for all but the chorus which was left in Italian. With the Dean Martin version all but the chorus – which again was left in Italian – was performed in English. It was this version that became synonymous with Ernie. It was “his” song, a song everyone who knew and loved him associated with Ernie.

A Fascination with Cessna Planes

Also associated with Ernie was his beloved Cessna plane.  An accomplished Pilot with many flying hours under his belt, Ernie loved to fly; it was his passion. His fascination with flying began in the 1940s when, as a child, he would watch the planes fly over him on their way to war but it was not until tragically his 12-year-old son died following being run over by a bus and in the aftermath of such heartbreak his marriage broke down that Ernie pursued his dream in a bid to retain his sanity and he learnt to fly. He continued to fly until early into the 21st Century when due to his deteriorating eyesight he failed the medical but continued to feed his passion for all things flying related by the reading of books, magazines and watching films.

“Volare” quite literally translates as “Fly”, with the Italian lyrics translating to “…and I flew, I flew happily higher than the sun and even higher.”  It is with these words that his widow, Carol and son Anthony choose to remember him, having had them quite literally set in stone as they adorn his headstone, standing proud in York Cemetery. The Italian lyrics are beautifully inscribed in gold leaf around the bevel of the stone whilst the English translation is
etched into the body of the stone. His Cessna plane is reverse carved onto the top of the stone.
Singing and laughing are not the only thoughts that spring to mind when remembering Ernie.  A technician by trade, having started his career working on T.V.’s with Granada, Ernie was fascinated by anything with movements.  He collected watches, clocks and anything else that had movements. At the time of his death, he had an estimated 500+ watches in his collection and many of his relatives and friends now own one or sometimes two of “Ernie’s timepieces”.

“Time is the Greatest Gift You Can Have”

Ernie choose to always wear two watches, one on each wrist. When asked why he wore two he would laugh and
say: “So I can check each is right!”. When asked why he collected so many he responded: “Because time is the
greatest gift you have.” This too is recognised on his memorial which is inscribed with the words: “Time passes,
love remains.”

Listen out for the Cessna!

If you choose to seek out Ernie’s headstone in York Cemetery, pause for a moment and listen very carefully.  You may be surprised to hear and see a Cessna plane flying overhead.  Unless it’s Friday 13th. He would never fly on Friday 13th and that is the only day so far that anyone visiting his grave has not been aware of the plane flying over.  If you see and hear it you can guarantee that it will make you smile – because that is what Ernie, our Singing Pilot, does.
Share on Facebook Share
Share on TwitterTweet
Share on Pinterest Share
Share on LinkedIn Share
Share on Digg Share